Skip to content
If you click a link on this page, then go on to make a purchase, we may receive a commission but at no extra cost to you. Learn More
Categories Beginner Photography

In photography, technology in videography has moved forward in giant leaps. Long gone are the day of 8mm, Super 8 films, and video cassettes.

For many years now, digital cameras and smartphones have allowed you to record digital video as well as still images.

Video recordings, though, will eat through your storage much faster than clicking photographs.

In this article, we will see how to choose the proper memory card for your videography.

As with digital photos, there are several aspects that affect how much space a video takes in your memory card or internal storage.

The most obvious thing to consider is the length of the video itself: the longer you record a video, the more space you need to save it.

Other things to consider, same as per still photographs, are the video format and its frame rate, its resolution, and bitrate (video compression).

Our eyes and brains can process 10 to 12 images per second and perceive them individually.

For us to perceive a smooth, continuous action motion, we need to see it at 24 images per second or more.

This is why common video settings in camera phones and digital cameras allow you to shoot video with 25 to 60 frames per second.

This aspect of a video, how many images it packs for each second of the movie, is called frame rate, and it is measured in frames per second, FPS in short.

Every camera records video in a particular format. The most common one is the MPEG-4, which is great for sharing directly on Youtube and Facebook.

My Olympus saves video in MOV format, a standard based on the MPEG-4 encoder developed by Apple for QuickTime.

My Sony (and Panasonic cameras) save videos in AVCHD, a lossless compression video format.

On its site, Adobe has a useful page about video formats, where you can find a more detailed description of those formats.

Until a few years ago, there were only two types of video resolution: Standard Definition (SD) and High Definition (HD).

As with most cameras, my Olympus OM-D camera lets me use SD, HD, and Full HD (FHD) resolution.

Here you can find a list of all common video resolutions.

The higher the resolution, the more space you need to store your video.

The bitrate can be associated with the compression of the video.

Some cameras let you choose that, although restricting the choice of frame rate and resolution.

For the Full HD resolution, my Olympus OM-D lets me choose between Normal, Fine, Superfine, and All-Intra bitrate, the latter giving the best quality.

Here is the combination of bitrate and frame per seconds (e.g., 25p are 25 frames per seconds) I can choose from:

The higher the bitrate, the more space the video will take on your card. Refer to your camera manual to dig into these settings.

How To Read The Label Of A SD/MicroSD Card?

Together with their performances, the card label has evolved every passing year and it is now packed with numbers and symbols.

Here is how you read the label of your SD card to understand if it suits your needs.

This is the largest number of all, and it advertises how many GB worth of data you can store on the card.

The max read speed indicates how fast data can be read from the SD card under ideal conditions.

If you are used to filling your SD every time you have your camera with you, you probably want to get a card with a fast max read speed to cut down the time needed to download your images and video from the card into your computer.

Some cards indicate this speed not by considering the max reading speed in MB/s but the x-rating. The x-rating relates to the CD-ROMS original data transfer speed of 150 KB/s.

The first cards, up to 2GB, were called SD (or SDSC) and used a FAT12/FAT16 file system. SDHC cards have a capacity of up to 32GB and use the FAT32 system.

Larger cards, such as the SDXC (up to 2TB) and the newer SDUC (up to 128TB), need to be formatted with the exFAT file system.

Together with their increased capacity, newer SD cards can support higher bus speeds.

Speed classes refer to the write speed on a fragmented memory card, where fragmentation means that the data are not continuous in the memory. Class 2, 4, and 6 were used to indicate a writing speed of 2, 4, and 6MB/s, respectively.

After this, to further characterize the new cards’ performances, UHS and video speed classes were implemented.

Indicated by the letter V followed by a number, this classification aims mainly at videographers, and it indicates the minimum sequential writing speed of the card.

A V30 card is able to save in its memory at least 30MB of data each second.

SD cards Bus Interfaces are labeled as I (UHS-I, the least performant), II (UHS-II), III (UHS-III), or UHS-express (the most performant) and indicate the maximum amount of data that can be physically transferred in and out the card.

What Card Should I Use?

Most digital cameras and digital video camcorders and some smartphones save images and videos on an SD or microSD memory card.

Today, 64GB SD cards are common and quite affordable: they offer a good amount of storage for SD and HD videos.

If you regularly shoot high-resolution FullHD and/or 4K/8K, you should aim for cards offering at least 128GB of storage.

But when it comes to videography, space is not the only requirement to look for when choosing a suitable card: writing speed is extremely important.

Good quality videos are heavy and they will fill the camera buffer quickly if your card is too slow to save the continuous stream of data.

The table below shows which type of cards are suitable for a particular video application.

How Many Minutes Can I Record Per Memory Card Size

The size of a video depends on its resolution, frame rate, and bitrate. The best way to get an estimate of how many minutes of video you can record on your cards when using the current camera settings is to check your camera LCD screen.

Similar to what your camera does for Still Images when you switch it to video mode, it will tell you how long you can record on the card with the current settings.

If you need an estimate for different data (MP3, JPEG, MPEG), make sure you carefully read the table manufacturers print on the card package when you shop for your new card.

And if you already have a bunch of cards at home to shoot video, pick the largest one with the higher speed class.

Mind that because of legislation, cameras in Europe (and possibly in other parts of the world) cannot record video for more than 30 minutes: the video will automatically stop after 29 min 59s.

Finally, particularly if you use a card with the FAT32 file system, the camera will automatically record your video in multiple clips to accommodate the limit of 4GB maximum file size.

Why use video for astrophotography?

And if you are a beginner in lunar photography, you will probably be shooting still photos in RAW format.

But one of the best ways to photograph the Moon and the Planets is to capture short video clips.

This is because at the large magnifications typically used in this type of photography, turbulent air causes the Moon and the planets to wobble incessantly.

To freeze the wobble and increase the detail and sharpness of the final images, you should use a fast shutter speed (typically faster than 1/100s) and take a large number of images to stack.

Using an intervalometer to show RAW images, in a minute you will take less than 60 images, as you often have to wait at least one second between images.

But if you shoot a video, even with a relatively slow frame rate of 30p (30 FPS), you will take 1800 video frames in just a minute.

This is a far larger pool of images from which to cherry-pick the best ones for image stacking.

Planetary astro cameras, such as the ZWO ASI385MC can take RAW videos, which are uncompressed. They give the best quality, but you may look at several GB of data for one minute of video. 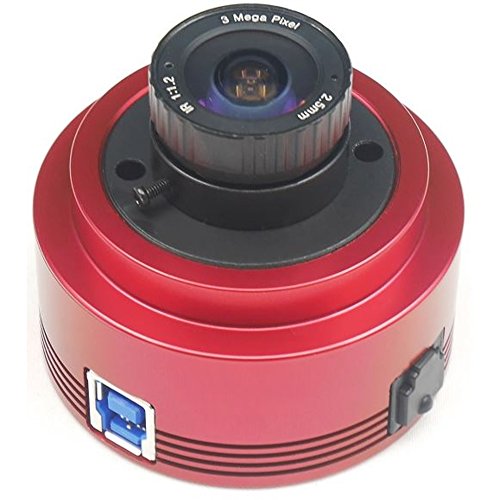 The ZWO ASI835MC planetary camera, which allows you to take RAW videos with a high frame rate.

With most everyday DSLR cameras and smartphones (yes you can use them for shooting the Moon in combination with a telescope), you cannot shoot RAW videos.

Here is my way to set the camera for taking video of the Moon (and planets):

Refer to your camera manual for knowing how to use these settings.

Until a few years ago, picking a memory card was a no-brainer. Nowadays, it still is a very simple job, but if you are into videos, there is more than the mere storage capacity of the card.

Because videography is computationally expensive and involves a lot of data to be continuously transferred and written, you should really learn how to read the label of an SD card so as to pick the one that best suits your needs.

And when in doubt, just aim for a card with the highest capacity and video speed you can afford.