Skip to content
If you click a link on this page, then go on to make a purchase, we may receive a commission but at no extra cost to you. Learn More
Categories Astrophotography

New astrophotography group member: “Hi, I’d like to get some photos of stars. Could you suggest some settings for my smartph…”

Until a few years ago, this was also the standard reaction you were getting from mentioning smartphones in groups about photography in general.

But is it really that bad and hopeless to use your smartphone for photography, and for astrophotography in particular?

Let’s find it out together.

Table Of Contents show
1) Is It Possible To Capture Night Sky Objects With A Mobile Phone?
2) What Sort Of Objects Are Possible To Photograph?
2.1) Milky Way
2.2) Stars
2.3) Moon
2.4) Planets
2.5) Deep Sky Astrophotography
3) How Can I Use My Smartphone For Astrophotography?
3.1) Camera Apps
3.2) Tripod Mounts
3.3) Telescope And Binocular Mounts For Afocal Astrophotography
3.4) Eyepieces
4) What You Will Need To Take Astro Images With A Phone: Step By Step Instructions
5) Conclusion

Is It Possible To Capture Night Sky Objects With A Mobile Phone?

Short answer is YES, it is… to an extent.

Smartphones have gone a long way since the first model with VGA cameras and can now rival most consumer compact point and shoot cameras, particularly in good light conditions.

We all know that smartphones have eaten heavily into the camera market, but you could argue that comparing sales is not fair: a camera, in fact, does photos and videos, while a smartphone is also a computer.

But have a look at the most popular cameras used on Flickr, and you see Apple is No. 1 and many other camera phones are listed in the top 20.

But night photography is hard, even for a DSLR camera: what could possibly a smartphone do, with its tiny sensor and small lens?

Modern smartphones can actually do quite a lot, providing you are not after a masterpiece to fill an art gallery wall with.

What Sort Of Objects Are Possible To Photograph?

So, what can you photograph in the night sky using your phone?

Milky Way photography is the hardest thing to photograph with a smartphone, mainly because it is very faint and requires long exposures.

But if you are at a very dark location, our Galaxy may stand out just enough to make it possible to photograph it with your phone. Here is a nice article from Lonely Speck about this.

Stars can be photographed easily with a smartphone, particularly from a dark location. It is better to focus on known constellations containing bright stars, such as the Orion Constellation or Auriga.

Smartphones usually have a fairly wide lens, so you can photograph a good amount of stars and deep-sky objects in a single frame.

While you will hardly record any detail, it is fun trying to spot as many deep-sky objects and constellations as you can.

If you can, try to include an interesting foreground for a more compelling and storytelling result.

Star trails also are well within the capabilities of modern smartphones.

The Moon is big, bright, and beautiful. And how many times have you spotted it and reached for your phone to capture its beauty?

And, in my experience, those memes are usually spot on.

But don’t let this discourage you. The phone is not the problem here: you will get similar results with any DSLR and a similar wide-angle lens. Sure, the image will be sharper and cleaner, but the Moon will not be any bigger.

In fact, a smartphone can be easily mounted on a telescope for far better images, using a technique called the afocal method.

This is when you replace your eyes looking into the eyepiece with a digital camera without removing its lens.

The idea behind afocal photography is that the image magnification is provided by the combination of the telescope and eyepiece focal length (50x for the Moon shown below), while your phone is replacing your eye on top of the eyepiece.

Modern smartphones can take amazing 4K footage, and I strongly suggest you take advantage of this and record a 4K video for the Moon and the Planet.

If you want the best possible resolution, you will have to stick with getting raw images, but you will be stacking far less frames than with video. The quality of the final image is, as usual, a balance between the single image quality and the number of frames stacked.

And if you don’t have a telescope, a binocular can work just as well, although offering lower magnification.

As usual, whatever works for the Moon works for the Sun as well, with the notable requirement of a special solar filter (do NOT attempt any solar observation or photography without using a full aperture solar filter in front of your telescope or binocular).

If the Moon looks tiny when photographed directly with your smartphone, planets will look like featureless bright dots, if visible at all.

With an 8×40 binocular, I was able to snap this Jupiter-Saturn close conjunction and even three of Jupiter’s largest moons using the phone digital zoom.

With a telescope and a proper eyepiece, you will be able to get even more planetary details, like a hint of Jupiter’s bands.

A shorter focal eyepiece, like a 10mm and the use of barlow lenses can bring you even closer to planets, allowing you to easily see, for example, Saturn’s ring.

With the afocal method, it is certainly possible to photograph the brightest deep-sky objects, such as the great Orion Nebula, the Pleiades, Andromeda Galaxy, and few others.

How Can I Use My Smartphone For Astrophotography?

Learning how to use a smartphone for astrophotography can be great, particularly if you have already invested in a setup that was mostly intended for visual observation, such as a dobsonian telescope.

We have already written about the different types of telescopes, and some, like my Skywatcher Heritage 130p tabletop dobsonian will not let you achieve focus with a camera.

The cheapest solution is then using your phone to do afocal astrophotography, and this video will show you how.

For doing astrophotography with your phone, you need to look for 3rd party camera apps and phone supports.

More often than not, the pre-installed camera app is rather basic. Sure, it can have a lot of “creative” functions, like 4K video, time-lapse, slow motion, self-timer and so on, but as far as photographic controls are concerned, they are relatively poor.

For astrophotography, you want to use a camera app capable of letting you manually set (and lock) the focus and adjust shutter speed and ISO value and allows you to save in TIFF or RAW (DNG) format.

For iOS, some of the must-have camera apps are NightCap, ProCam 8, and Camera+2.

I personally love NightCap, which has some very useful automated functions for astrophotography, like:

I am not an Android user, but if you are, you may want to have a look at DeepSkyCamera and ProCam X on Google Play.

If you want to try some starry landscapes or star trails photography with your phone, you have to keep your phone as steady as possible, well beyond the built-in stabilization capabilities.

It is crucial you find a way to mount the phone on a good tripod. Something as simple as this Manfrotto clamp is all you need. 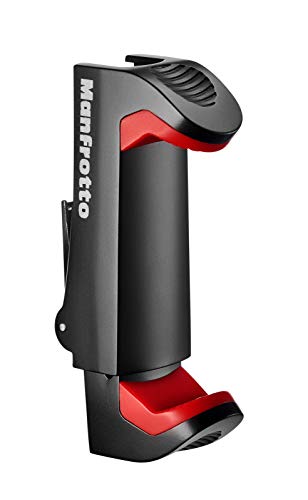 This Manfrotto Clamp is a universal holder to mount your smartphone on any tripod.

And if you are looking for an all-in-one solution, the Joby Gorillapod Stand PRO comes with the phone holder and the classic compact Gorillapod “wrappable” tripod. 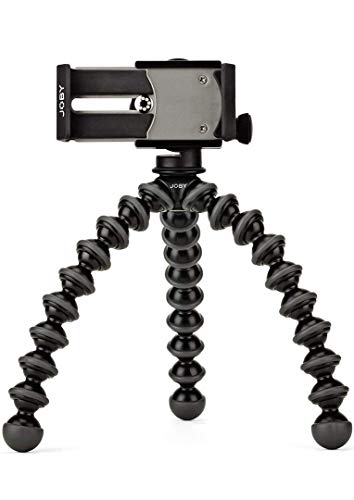 The Joby Gorillapod Stand Pro is a perfect lightweight and compact all-in-one solution for keeping your smartphone steady.

You are now stepping into real astrophotography, where the quality of the optical instrument you use and the mount you pop your instrument on are much more important than the smartphone brand/model you have and/or the camera app you use.

Quality and reach of your optical instrument aside, the support you use to mount your phone is of crucial importance for good astrophotography. 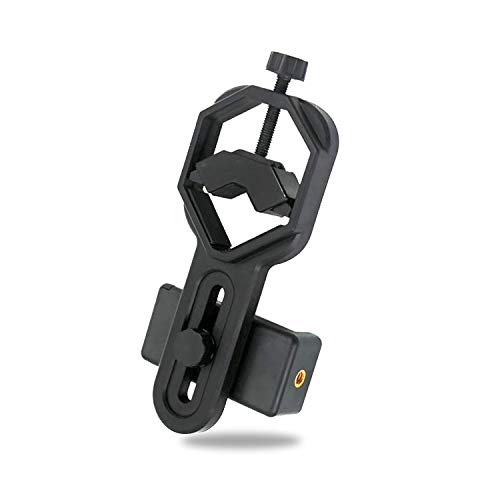 Probably the most simple type of universal smartphone adapters for binoculars, telescopes, etc.

This type of support is ok for the occasional use, like mounting your phone on your kids’ toy binocular to let them photograph the Moon.

For serious smartphone astrophotography, the cons with this type of adapter are way more than the pros:

The pros are… well… it’s cheap.

The best smartphone support on the market is arguably the Celestron NexYZ phone scope adapter. 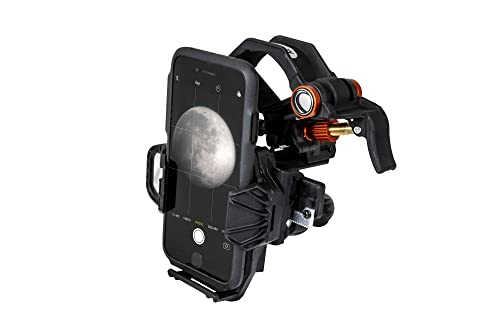 The Celestron NXYz phone adapter allows you to easily couple your phone to telescopes, spotting scopes, binoculars, and microscopes.

Compared to the cheap adapter, the Celestron is:

Unfortunately, there are few cons too:

Because the Celestron NXYz can’t be fixed directly to a tripod, you have to have your instrument sitting on one. Not a problem if you are using a telescope or spotting scope, but not all binoculars can connect to a tripod.

Luckily for us, a simple Manfrotto SuperClamp can solve this problem.

Last thing to consider is that phones grow larger and heavier every passing year, and entry-level telescopes have rather weak focusers.

The phone’s weight plus the adapter can create some temporary issues and misalignments that can reduce the image quality.

The eyepiece is what provides you the desired magnification. If you are an avid observer, you probably already have high-quality eyepieces. If not, the standard ones supplied with your telescope will suffice.

Do keep in mind that, as with any optical element, eyepieces too can have some optical aberrations that can degrade your image (or parts of it). They can suffer from field curvature, coma, chromatic aberrations, and purple fringing, etc.

Finally, you should also consider the eyepiece eye relief to get your phone’s camera at the optimal distance from the eyepiece. This may be hard to do with the universal adapter, while it is fairly easy with the Celestron NXYz.

What You Will Need To Take Astro Images With A Phone: Step By Step Instructions

Unfortunately, there is no detailed workflow I can offer you that will work with any phone, instrument, and setup.

What I can do is break the whole process into a few common steps:

Here is a video from Astrobiscuits showing how he photographed the Great Orion Nebula with a phone and a binocular.

Your smartphone can be an interesting way to let you do occasional astrophotography if you are traveling lightweight or with your setup built around visual observations.

Your smartphone can also be a great tool to initiate your kids to astronomy, as it can be easily mounted on a binocular using the same support you would use for your telescope.

Finally, before you go, make sure you download for free this ebook from NASA: A guide to smartphone astrophotography.