Skip to content
If you click a link on this page, then go on to make a purchase, we may receive a commission but at no extra cost to you. Learn More
Categories Astrophotography

Superzoom pocketable cameras, long telephoto lenses, binoculars, and telescopes are there to let you see up close distant and/or small targets.

If you have a telescope, you know you can increase the magnification by using a short focal eyepiece.

But what if you want to get even closer? Enters the Barlow lens.

Barlow lenses are an affordable way to increase the magnification of your setup, so, before you run to your dealer to buy a larger telescope, let’s see what a Barlow lens is and how you use it.

What Is A Barlow Lens?

Barlow lenses are optical elements that are named after Peter Barlow, an English mathematician and physicist who developed the first prototypes for this kind of lenses back in 1833.

Modern Barlow lenses are used in astronomy and astrophotography as optical elements to increase the magnification of a telescope.

A Barlow works similarly to a classic teleconverter, used to increase the effective focal length of photography lenses.

Teleconverters usually have more glass than Barlow, but their field of view is often better corrected and also the focus does not change.

How Does A Barlow Lens Work?

A Barlow lens is a diverging lens that increases the effective focal length of the optical system.

A Barlow is never the last element in the optical train and what it does is to extend further outwards the cone of light from the part of the optical train that is before it, so that what comes after, typically the eyepiece or the camera sensor, will see a larger image.

Benefit Of Using One For Astrophotography

The obvious benefit of using a Barlow lens in astronomy and astrophotography is that it is an affordable way to magnify the image from your telescope.

Particularly if you do astrophotography in direct focus rather than in eyepiece projection, i.e., you use the telescope as a photographic lens, a Barlow lens is a must.

In this case, you cannot use the eyepiece of different focal lengths in order to magnify the image.

The most common Barlow lens offers a 2X, 3X, or 5X magnification. Some Barlows, called variable Barlows, have a long nosepiece: as for eyepieces, in fact, by sliding in or out the Barlow you can alter its magnification. 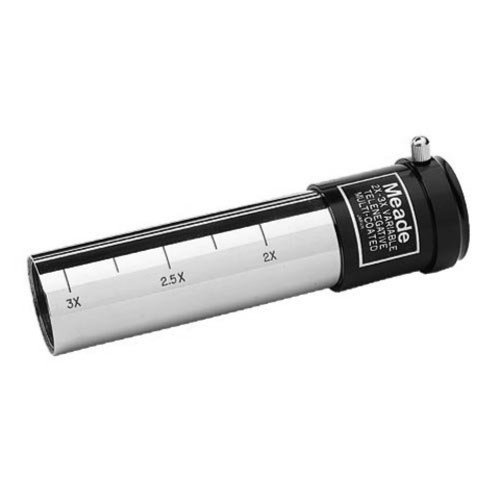 Another benefit is that a Barlow lens can help you to achieve focus with your camera if your telescope has a short backfocus.

Because of the divergent lens in the Barlow, the higher the magnification it provides, the more backfocus you have. With a longer backfocus, you may be able to reach focus with your camera.

Drawbacks Of Using One For Astrophotography

When you use a Barlow lens, you have a few shortcomings to consider:

Because it is a diverging lens, the cone of light is spread on a larger area, so the image gets dimmer with the increase of the magnification.

The same is true for teleconverters used with photographic lenses: a 1.4x teleconverter causes a loss of brightness of 1 f-stop, while a 2X teleconverter darkens the image by a full 2-stops.

If you already have a slow telescope, such as a small Maksutov, using a Barlow with high magnification can prove challenging and, ultimately, not worthy.

With my SkyWatcher Skymax 90/1250, a Barlow 3X pushes the instrument over its ideal limits. I found I can get better results by using a Barlow 2X and then crop.

Is A Barlow Lens Worth It?

Despite the few shortcomings I mentioned before, a quality Barlow lens is a terrific tool, well worth having in your equipment, but choose it wisely.

Televue Barlows are often considered the best Barlow lenses on the market, but their price is quite steep. 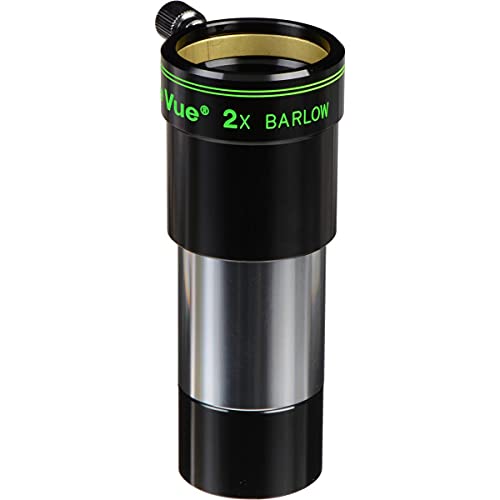 How To Use A Barlow Lens

Using a Barlow lens is not at all difficult.

Typically, a Barlow lens is made to be used in combination with an eyepiece.

For photography, you need to get a nosepiece for your camera. If you are using a planetary camera such as a ZWO ASI 120 MC, the nosepiece is included. If you use a DSLR or mirrorless camera, you may need to buy one for your T2 adapter.

Typical Applications For A Barlow Lens

Barlow are mostly used in Planetary and Lunar astrophotography.

With planets because you want to get more details on their surface, such as the bands in Jupiter, Mars ice caps, or the Cassini Division in Saturn’s ring system.

With the Moon, Barlow lenses are great to close in on lunar surface details, such as crater rims and central peaks, rimae, and mountain ranges.

Barlow lenses have no place in deep-sky astrophotography, as you want brighter images and high magnification, it requires an extremely precise tracking, guiding, and polar alignment.

In this case, instead of a Barlow, you should use a focal reducer, an optical element that reduces the effective focal length and the f-ratio of your telescope.

Difference Between A Barlow Lens And A Zoom Lens

Both a Barlow and a Zoom change the effective focal length of a telescope or of the lens.

The main difference between the two is that good quality zoom lenses are much more expensive than good Barlows.

This is because more glass is used in zoom lenses than in Barlow, it is more difficult to control optical aberration in a zoom than in a Barlow.

Barlow Lens Vs Small Camera Sensor: Which Is Better?

It is known that a cropped sensor camera produces larger images than that of a full-frame one, providing the focal length is the same.

This effect is called crop factor and it is not a true magnification, but it is equivalent to crop down the full-frame image.

A Barlow, instead, does provide a true magnification and an improvement in the optical resolution, at the cost of darkening the image.

In short, small sensor planetary cameras and Barlow lenses are different, but often complementary, instruments to squeeze the most out from your telescope if you choose them properly.

This video summarized very well the theory and the use of the Barlow lens.

Barlow lenses are a great and affordable way to magnify the image from your telescope, but you have to choose them carefully.

A 2X Barlow lens is probably the best all-rounder, while Barlows offering higher magnification should be reserved for telescopes with large aperture and relatively fast f-ratio, as the image dimmers with the magnification.