Stars appear to move fairly quickly through the night sky and to freeze them when photographing from a fixed tripod, you are bound to snap short exposures at high ISO and with an ultra wide-angle lens.

But aren’t you tired of compromising with the night sky? Don’t you wish for more? If so, stop looking at faster, better, and more expensive lenses and get a star tracker.

The SkyWatcher Star Adventurer PRO is one of the most highly regarded trackers among amateur astrophotographers and won’t cost the earth.

This is our detailed SkyWatcher Star Adventurer review.

Things To Consider Before Buying A Tracker

Astrophotography is a beautiful, rewarding, and educational hobby. But it can be frustrating and needlessly expensive if you don’t do your homework and let the “Gear Acquisition Syndrome” get you.

A star tracker like the Star Adventurer is a miniaturized equatorial mount.

While both allow to track the apparent movement of the stars, a tracker is smaller, lighter, and cheaper than a full-grown equatorial mount, making it the perfect device for beginners or astrophotographers on the move.

Once you have aligned your mount to the celestial pole, you can start taking the kind of long exposures needed to reveal the many wonders of the night sky.

Star Tracker Vs Equatorial Mount: What To Buy?

Full-grown equatorial mounts are superior to star trackers in many ways, offering better accuracy with heavier equipment and a computerized GOTO system to let you frame your target with ease.

But they are expensive, big and heavy, and require a power tank to work or, better, to be connected to the power grid.

Great if you can image from your garden with heavy telescopes, but I live in an apartment in Brussels, Belgium.

To do astrophotography, I often need to move as far as 140km away from my place, park the car and walk on trails for 20 minutes before setting up for the night.

The Star Adventurer offers me the best compromise between portability and astrophotography performances.

With a full-grown equatorial mount, my astrophotography would be much less enjoyable. When shopping for your first mount, my advice is to look past the pure performances and consider the big picture more.

Before going into details, let’s first have a quick look at the SkyWatcher Star Adventurer technical specs and at the Pros and Cons of this tracker

SkyWatcher began selling the Star Adventurer a few years ago, and we have seen at least three different versions of it. The main difference, though, was in the paint job: the first models were black, then red, and now are painted in white.

I own both a red and a white model, and I don’t see any difference in their performances.

The Star Adventurer is a DC electric motor integrating a polar scope.

At the front of the unit, there is the mounting clamp for vixen style plates and the clutch.

With the clamp, we can mount our gear using the declination plate or the ball head adaptor included in the PRO pack.

By tightening the black ring, the clutch is engaged, and the motor can rotate the payload. By loosening the clutch, you decouple the payload from the motor, and you can frame the target and compose the shot.

The back of the unit is dominated by the polar scope and by few dials with graduated scale.

If you look through the polar scope in the daytime, you’ll notice things are flipped upside down: that’s normal.

The dials have different purposes: they provide a way to polar align the mount or help with framing a target that is too faint to be visible.

On the right side of the unit, we find the tracking speed selector, which also turns on and off the motor.

If you want to photograph a starry landscape all at once, you can use the tracking mode 0.5X. The other speeds are more suitable for doing time-lapse with controlled camera motion.

At the top, there is the battery compartment for the 4 AA batteries. The battery cover has a table to remind you of the different operating modes.

Travel With Your Star Adventurer: Weight  And Portability

The full mount, with the wedge, declination plate, and counterweight weighs just under 3 kg.

The Star Adventurer has a maximum payload of 5kg: this is quite high for the size of the mount. Note that the counterweight is not considered to be part of the payload.

As a rule of thumb, though, in astrophotography, it is considered a good practice to charge the mount to about 60-70% of its maximum payload capacity.

This ensures a reliable tracking, easier balance of the payload, and a longer operational life for the mount.

By working with micro four-thirds cameras, it is rather easy for me to charge the Star Adventurer by less than 50% of its maximum capacity.

My heaviest configuration, though, is about 3.5kg, and that includes my heavy Olympus Zuiko 300 f/4.5, my Olympus OM-D EM-5 Mk II, the guiding system, and accessories.

For lunar and planetary work, I mount a SkyWatcher Skymax 90/1250 maksutov telescope, and I think this is the heavier and “longer” instrument this tracker can deal with.

The Star Adventurer can be powered up by using 4 AA batteries or by a power pack outputting 5V DC.

The power consumption is fairly low, and a set of batteries will last for multiple nights, and with low battery power, the LEDs on the star adventurer will start to blink.

I use rechargeable Panasonic ENELOOP PRO batteries: even when tracking for 7+ hours, I didn’t see the low battery warning going off.

A common complaint is that removing the batteries proves to be challenging. Instead of breaking your nails, get a plastic knife like those used by toddlers, and you will have no problems.

The tracking capabilities of a mount depend on the precision of the gears and the precision of the polar alignment.The Star Adventurer has a periodic error that is fairly low for the kind of mount, meaning you can get a good accuracy even with longer exposures and relatively long focal length.

The image below is a stack of images each 180″ long, using a 200mm lens on my micro four-thirds camera: this combination gives the equivalent field of view of a 400mm lens on a full-frame camera.

As for any mount, the longer the focal length, the more visible the tracking errors become, and you will reject a larger number of frames than when working at short focal lengths.

Overall, the Star Adventurer delivers good performances, providing you do not push it to its limits.

What’s Included In The PRO Pack?

The Star Adventurer can be purchased alone or in what is now called the PRO version. This is what you should consider, without a doubt.

The Equatorial Wedge is used to mount the Star Adventurer on a photographic tripod, and it allows us to precisely align the tracker to the celestial pole (see polar alignment).

To mount the Star Adventurer on the wedge, you have to use the included base plate.

This adapter allows you to mount a ball head on the Star Adventurer. This configuration is particularly interesting for starry landscapes, as you retain full control on how to frame the scene.

The Declination Plate And Counterweight

For deep sky astrophotography and anything beyond ultra-wide star fields, you should mount your gear using the Declination plate.

This will be your go-to setup for astrophotography, and you will probably use the Star Adventurer in this configuration most of the time.

There are several advantages in using this plate:

With no ball head, the rigidity and usability of the system is improved, and you can better balance your gear on the Star Adventurer, thus improving tracking performances.

The Polar Illuminator allows you to easily see the reticle in the polar scope for the polar alignment.

It comes in two pieces: the illuminator itself and an adaptor base. While the illuminator fits in the Star Adventurer body, you need the adaptor to mount it on the declination plate.

The red light is dimmable, but there is no on/off switch. To turn the illuminator off, you have to unscrew almost completely the battery cover. Not the greatest solution, if you ask me.

What’s Not Included (But Would Be Useful)

Some extra accessories can make your life easier and improve the tracker usability.

Are you wondering how to frame a target without a computerized GOTO system?

The simplest and fastest solution is to get a cheap red dot star finder you can mount on your camera hot shoe.

After you have calibrated the star finder to be sure is aligned with your lens, to frame a target look through the star finder and move the payload to superpose the red dot to your target (or the region where it is).

To make polar alignment more comfortable and to avoid kneeling on the ground, you can get a right-angle viewfinder for the polar scope.

Shutter Release Cable For Your Camera

The Star Adventurer can control your camera, and the cable you need is available from SkyWatcher for all the major camera brands, but it is optional.

I still prefer an external intervalometer for astrophotography, but if you want to create a time-lapse, this can be a good option.

One of the strengths of the StarAdventurer is its ease of use:

Setting up the Star Adventurer is reasonably quick, once you get used to the process.

A good polar alignment is crucial in astrophotography, as it allows you to expose longer while keeping the stars round.

Polar align means that the mount has to be aligned to the celestial pole.

For us in the Northern Hemisphere, to polar align the Star Adventurer, we have to put Polaris, the North Star, in the proper position on the clock we see inside the polar scope.

The simplest polar alignment procedure can be summarized as:

If you are in the Southern hemisphere, you have to use Octans, a relatively faint constellation.

The video below clarifies how to work with the graduated circles.

A good alternative to the Star Adventurer is the iOptron SkyGuider PRO. While it has similar specs and performances, it also has a slighter higher price tag, and its wedge seems to be worse than that of the Star Adventurer. See our review here. 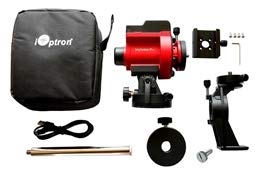 If you are constantly on the move and mostly interested in starry landscapes and star fields, the compact and fully mechanical Omegon Minitrack LX3 tracker is worth considering. 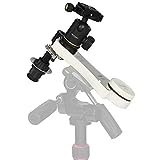 A star tracker is the key to unlocking the beauty of the night sky. This is the first piece of astrophotography equipment you should consider, and the SkyWatcher Star Adventurer is one of the most highly regarded trackers among amateur astrophotographers.